The pupil said she has been receiving threats from fellow pupils, warning her not to return. 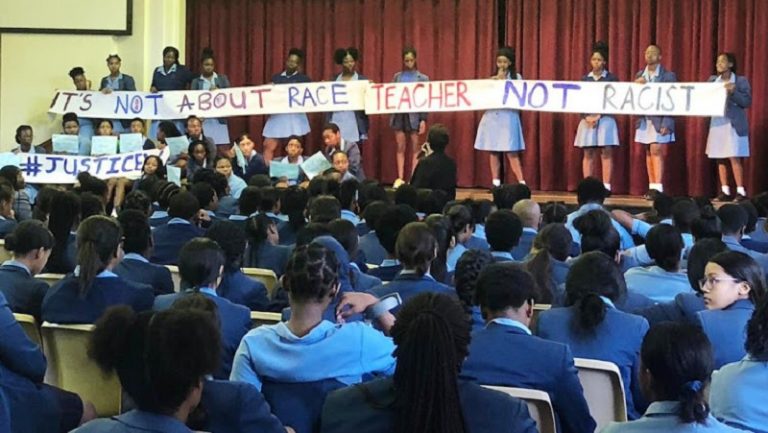 The mother of the Sans Souci Girls’ High pupil, slapped during an altercation with her Afrikaans teacher has decided to withdraw her child from the school, amid concerns for her  daughter’s well being.

According to the child’s lawyers the mother had no confidence the disciplinary hearing set for Friday would be “fair or impartial.”

The Chamber of Legal Students (CLS), which has been representing the Grade 9 pupil, issued a statement on Thursday, which read:

“The decision to withdraw the learner from the school was prompted by concerns for her well-being, in the face of the unfair and unlawful treatment she has been subjected to and the extremely hostile environment the school has created for her.

“This is not an environment conducive for her to study in… In such circumstances, the mother has no alternative but to take her child out of the school. This is in the best interest of the learner.”

The lawyers said the extended unlawful suspension has denied the pupil of her right to education.

Furthermore, they accused the Western Cape Education Department of refusing to “step in and protect the learner’s constitutional rights”.

The child no longer has an obligation to participate in the hearing, however, “The mother will proceed with legal action against the school, the SGB (school governing body) and the Western Cape Department of Education for the violation of the learner’s rights.”

The pupil had said she no longer wants to return to her school after her court appearance on Wednesday.

The pupil said she has been receiving threats from fellow pupils, warning her not to return.

According to News24, WCED spokesperson Bronagh Hammond on Thursday confirmed “rumblings” of a protest at the Newlands school if the pupil returned.